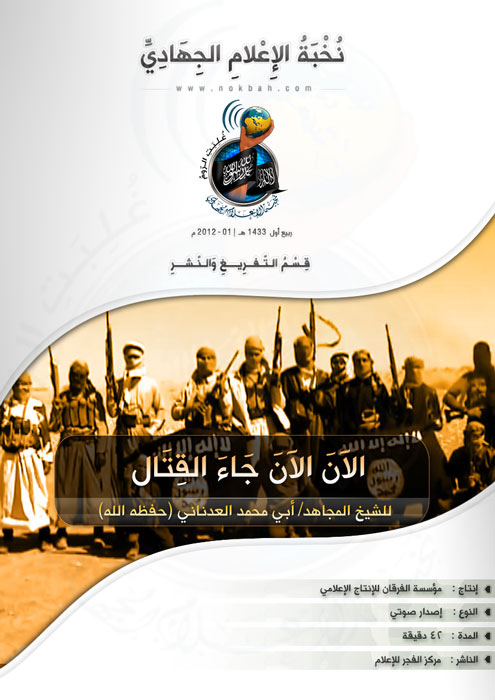 The Islamic State of Iraq’s “Sheikh” Abu Muhammad al-Adnani released an audio statement in late January, reaffirming the will of the organization to fight and drive out foreign influence in the country, both American and Iranian. Within the almost hour long speech is a threat to our Iraqi allies:

“[Iraq is] a shame upon the history of America! It has been defeated and no longer has the ability for direct confrontation since it signed the withdrawal agreement and fled from the cities to the military bases, to escape the trap of attrition it suffered for many years, and it is now returning to the proxy war. Our fight is still with their agents and their apostate followers, and the rejectionists (“rejectionists” or “rawafidh” in Arabic, is a term Sunni jihadis use to refer to Shia.).”

It is interesting to note that Adnani conflates both the U.S. and Iran as something that needs to be defeated, when in most parts of the world the two countries are seen to be on rather opposite sides of the spectrum. His basic view here is that Iran (and all Iraqi Shia, the “rejectionists” whom he believes to be Iranian proxies) as well as the United States are foreign interlopers interfering with the sovereignty of Iraq. Another reason they are conflated, and maybe the most apparent here, is that they are simply not Sunnis, and are therefore equally scorned.

Adnani’s statements are all the more interesting considering that he himself is most likely not an Iraqi, and one of the many Sunni fundamentalist fighters that have crossed into Iraq to fight American and Iraqi security forces, as well as wage unrelenting havoc on Iraq’s civilian populace.

Note: We will not do ISI the service of linking to a jihadist website. Many of these statements are posted to jihadist internet forums and even to Youtube shortly after their release. With the correct search, you can quickly find a number of links on the statement.