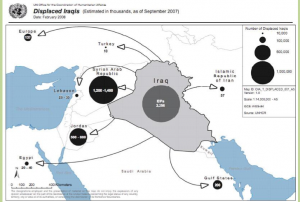 In the run-up to the 2003 Iraq invasion, many feared a refugee crisis would ensue as Iraqis fled combat. Considerable effort went into planning for this contingency,but this anticipated refugee crisis did not materialize: the war did not immediately prompt the displacement or exodus that many feared. In the initial aftermath of combat operations, the refugee situation even improved; between 2003 and 2005, some 325,000 Iraqi refugees repatriated after having fled during the regime of Saddam Hussein.

However, as sectarian violence escalated in 2005 and 2006, the security situation deteriorated and displacement exploded. Most importantly, the February 2006 bombing of the Al-Askari Mosque in Samarra, and the civil war that followed, sparked massive waves of displaced people beyond Iraq’s borders. This exodus constitutes the largest movement of refugees in the Middle East since the founding of the State of Israel.

This violence dramatically reversed the favorable repatriation trends of 2003; tens of thousands of refugees left Iraq each month, and thousands of others were displaced internally. By the end of 2006, roughly four million Iraqis had fled. Iraq and neighboring states struggled to provide basic humanitarian assistance, and appeals issued by the UNHCR called upon the international community to act.

The U.S., which had admitted a mere 202 Iraqi refugees in 2006, committed to resettled more Iraqis, but the bureaucracies were inadequately funded and staffed to swiftly ramp up any ambitious efforts.

The scope of the refugee problem has grown substantially. Since 2006, the number of displaced Iraqis has grown to almost five million. As of March 2010, some 2.8 million remain within Iraq as internally displaced persons (IDPs). To be sure, the scope of daily violence has diminished considerably in the past two years. This has prompted a few hundred thousand Iraqis – the vast majority of which are IDPs – to return to their provinces. Some 1.5 million Iraqis remain as refugees outside of Iraq’s borders, scattered across Syria, Jordan, and other countries throughout the region and beyond. These refugees face uncertain futures as host countries strain to support massive amounts of Iraqi refugees amidst dwindling international attention.