At the end of the First World War, the United Kingdom seized the three Ottoman provinces of Mesopotamia – Basrah, Baghdad, and Mosul – and formally took control of the newly-created country in 1920.  The occupation was immediately unpopular on the home front, and a mounting Shiite insurgency only compounded public criticism. T. E. Lawrence gave voice to this concern, which eventually morphed into the ‘Quit Mesopotamia’ campaign: “The people of England have been led in Mesopotamia into a trap from which it will be hard to escape with dignity and honour.” 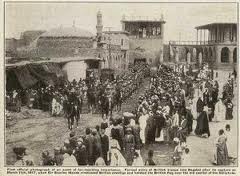 The British had managed their occupation partly through the use of Assyrian Levies, which were among the first Iraqi military forces established under direct British command.

When the British government finally succumbed to public pressure to withdraw from Iraq in 1932, it left behind Assyrians to face the consequences of their association with the departing occupier.  In August of 1933, the massacre at Sumayl in Northern Iraq was the start of a systematic killing spree of an estimated 3,000 Assyrians.